CANARY ISLAND CUISINE – WHAT YOU SHOULD TRY

Authentic Canarian cuisine, same like whole Spanish cuisine is full of flavours and aromas. Eating well in the Canary Islands is not too difficult. The warm climate and many sunny days of the year made it easy to find here locally grown and great quality products and dishes. It is thanks to these products, such as cheese, wine, fish and seafood as well as fruit and vegetables, makes it easy Canarian gastronomy to be such a good attraction among to already many other attractions that we can found in this part of Europe.  If you would like to know what to try while visiting the Canary Islands, I invite you to read this post. Canarian dishes are traditional dishes of the Spanish countryside, brought by immigrants and over time slightly modified by locals. 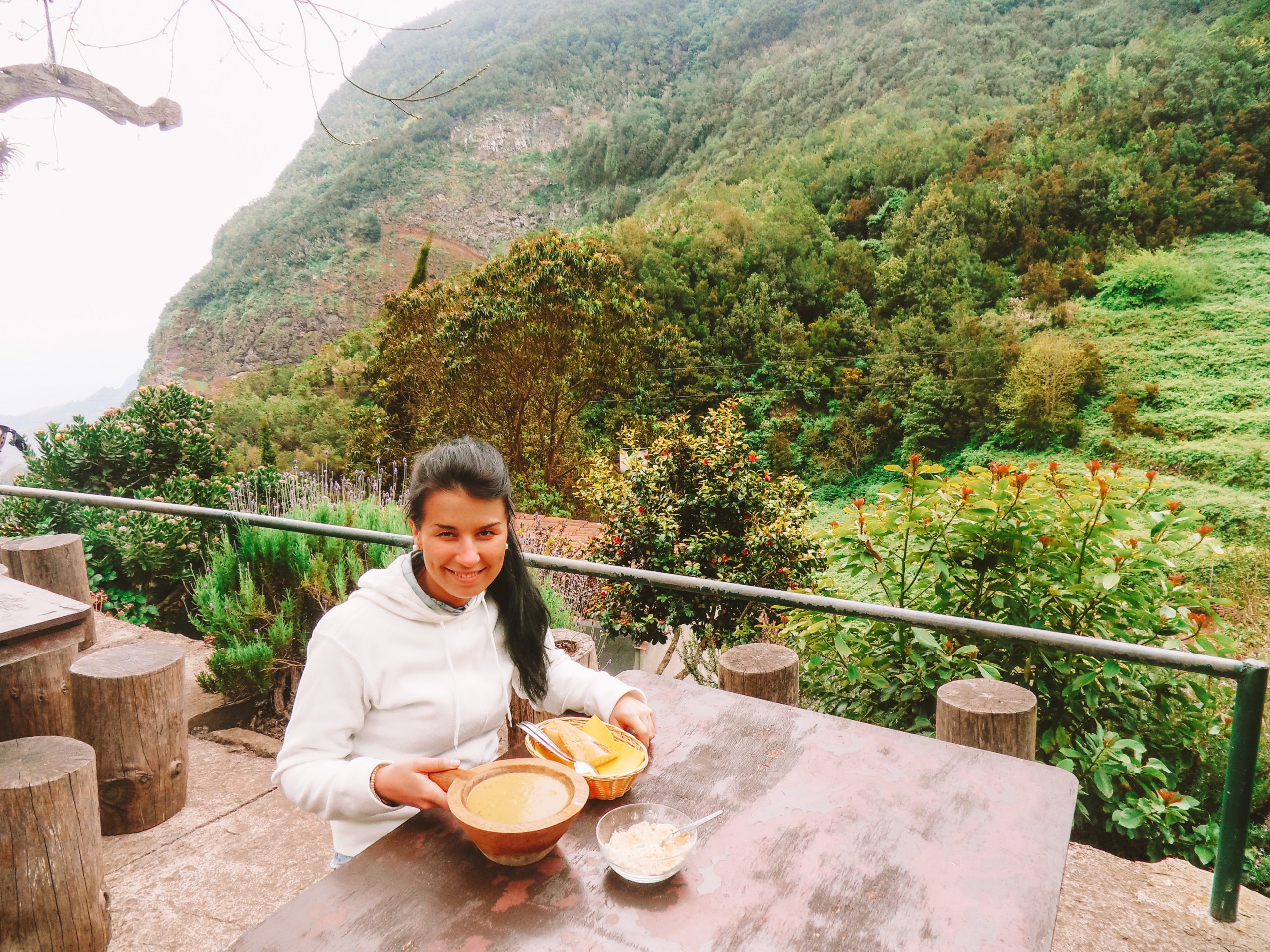 Small potatoes cooked in very salted water. Once, according to tradition, they were cooked in salt water straight from the ocean. Also today, enough salt is added to remain on the crust after cooking. Papas arrugadas is very often served with mojo sauces. The simplest recipe for papas arrugadas is: potatoes should be thoroughly washed but not peeled, nor should they be too large.  The water in the pot should cover the potatoes slightly, but it should not be too much water. Add good amount of salt to the water , preferably choose coarse salt and let it simmer. Strain and carefully shake the potatoes to dry. They should be wrinkled and covered with salt as in the photo below. 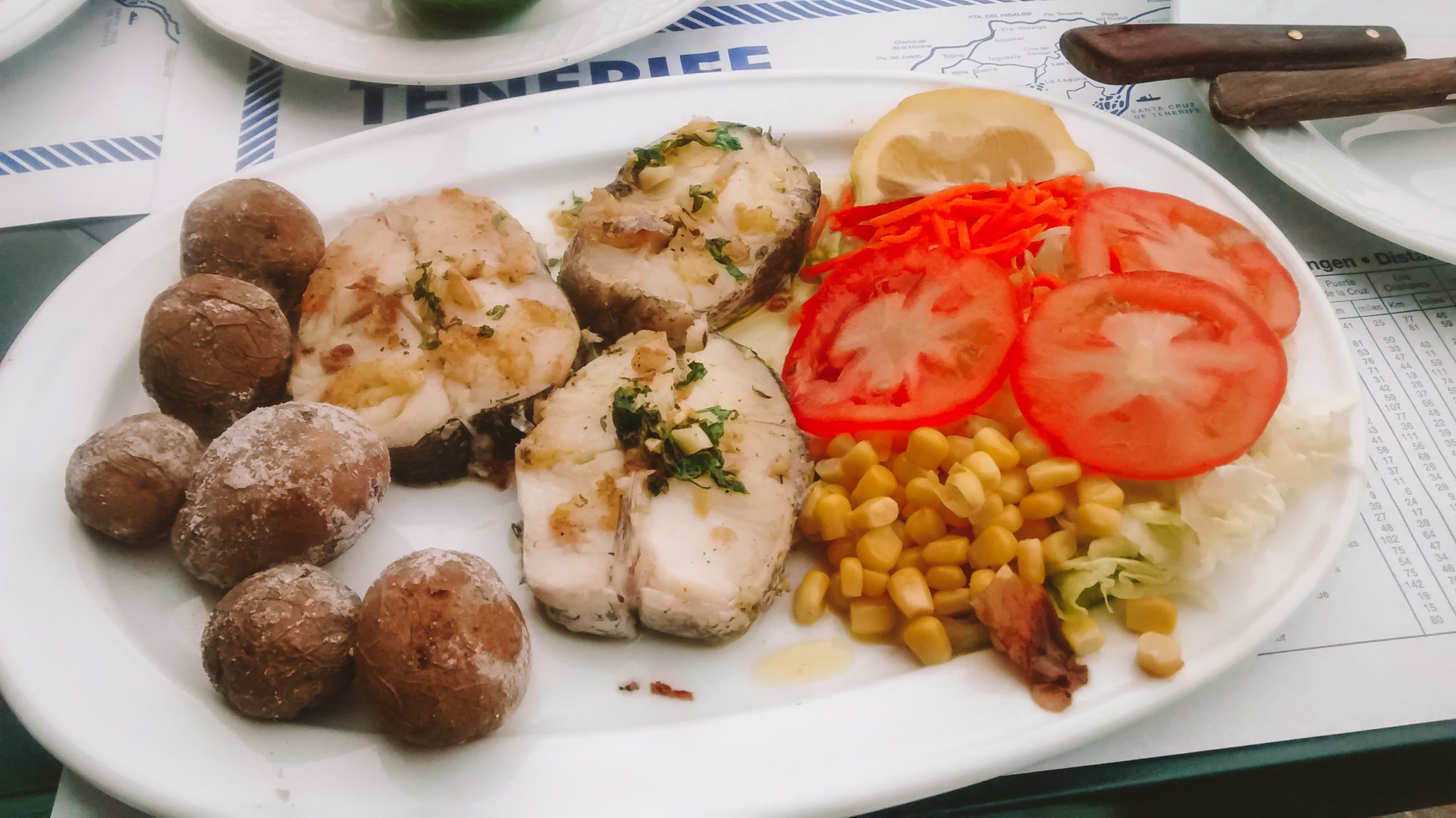 Many of Canarian dishes are served with one of two typical sauces called mojo. The two basic varieties of sauce are mojo picon (more spicy, red) and mojo verde (green). You can buy it in a jar, but most chefs or locals make mojo themselves, usually each slightly differently. The red mojo is prepared from chilli peppers, garlic, cumin, red pepper and vinegar. It is usually served as an addition to meat dishes. The green mojo, which is a great addition to fish, uses fresh coriander leaves instead of chilli. 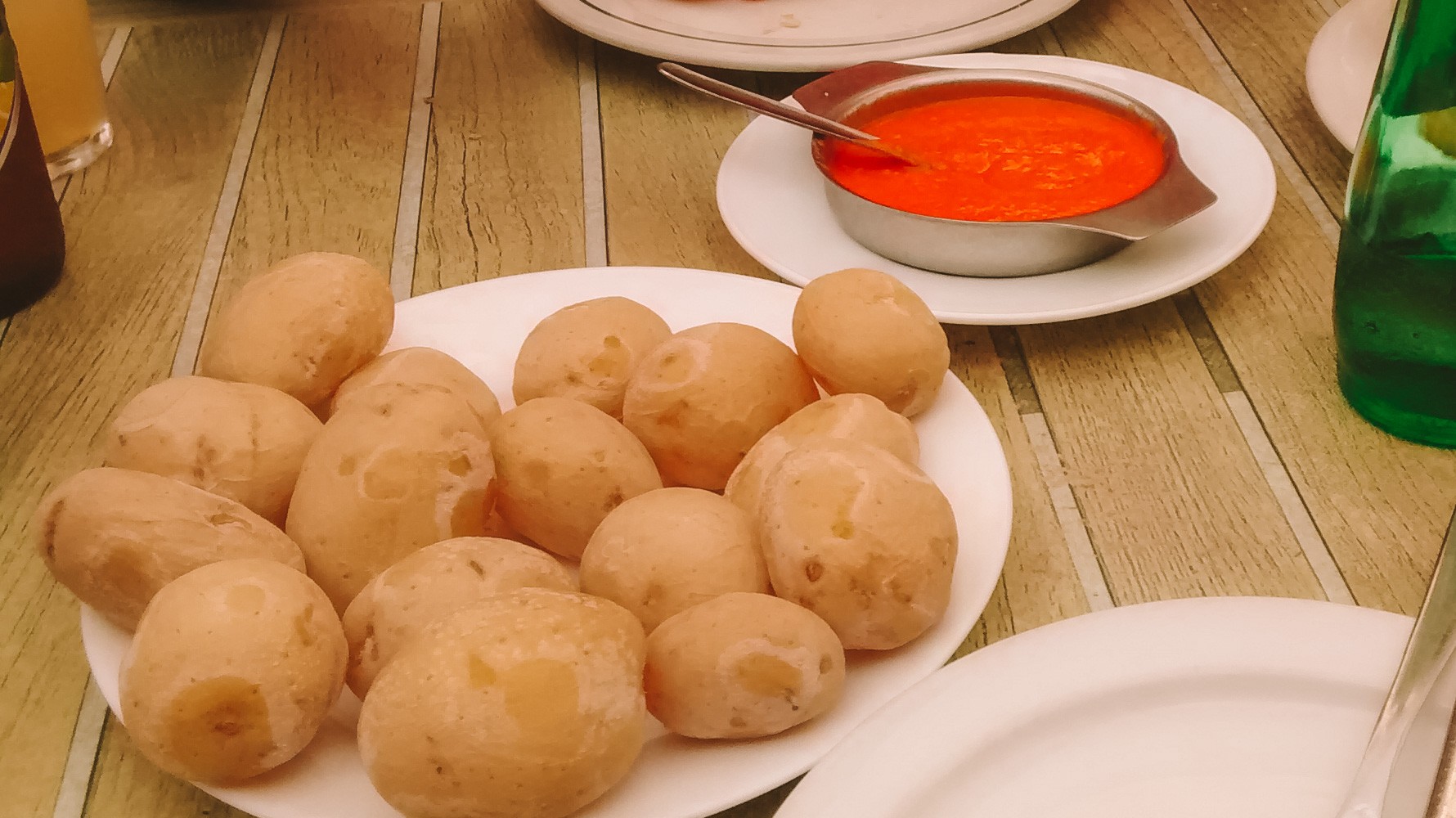 The basic product in the cuisine of indigenous peoples of the island, before the Spanish colonization, was flour from ground roasted corn, which is consumed on the islands to this day. Local residents add it to milk for breakfast, make noodles from it or add it to soups. You can also eat it simply with fresh cheese and mojo and even mix with ice cream or other desserts. As you can see, this product is very versatile and although in the restaurant menu gofio appears quite rarely (mainly as a starter) in Canary houses it is very common. If it appears in restaurants, you can often find it as – gofio escalado, i.e. thick paste with gofio mixed with fish broth served as in the photo below. 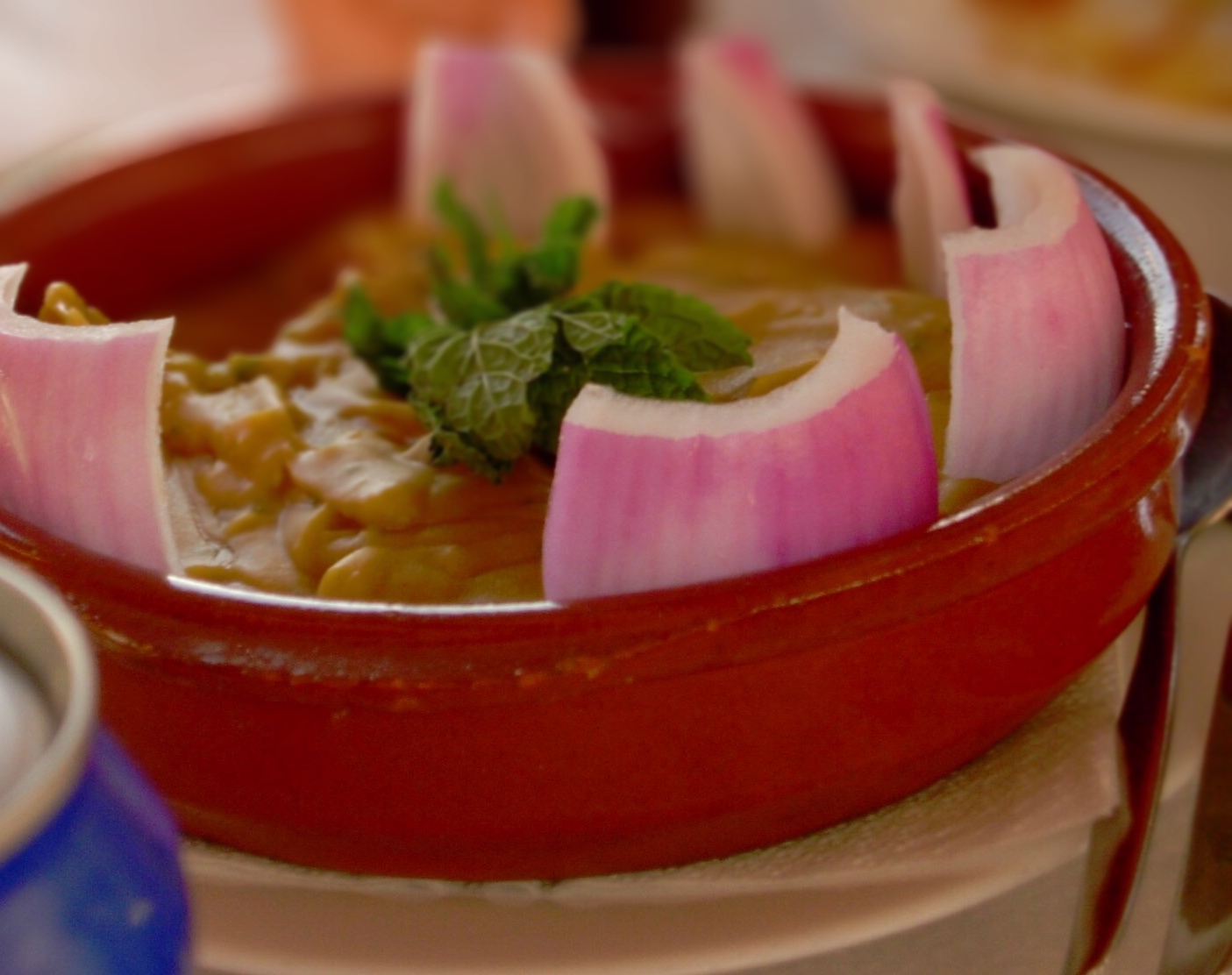 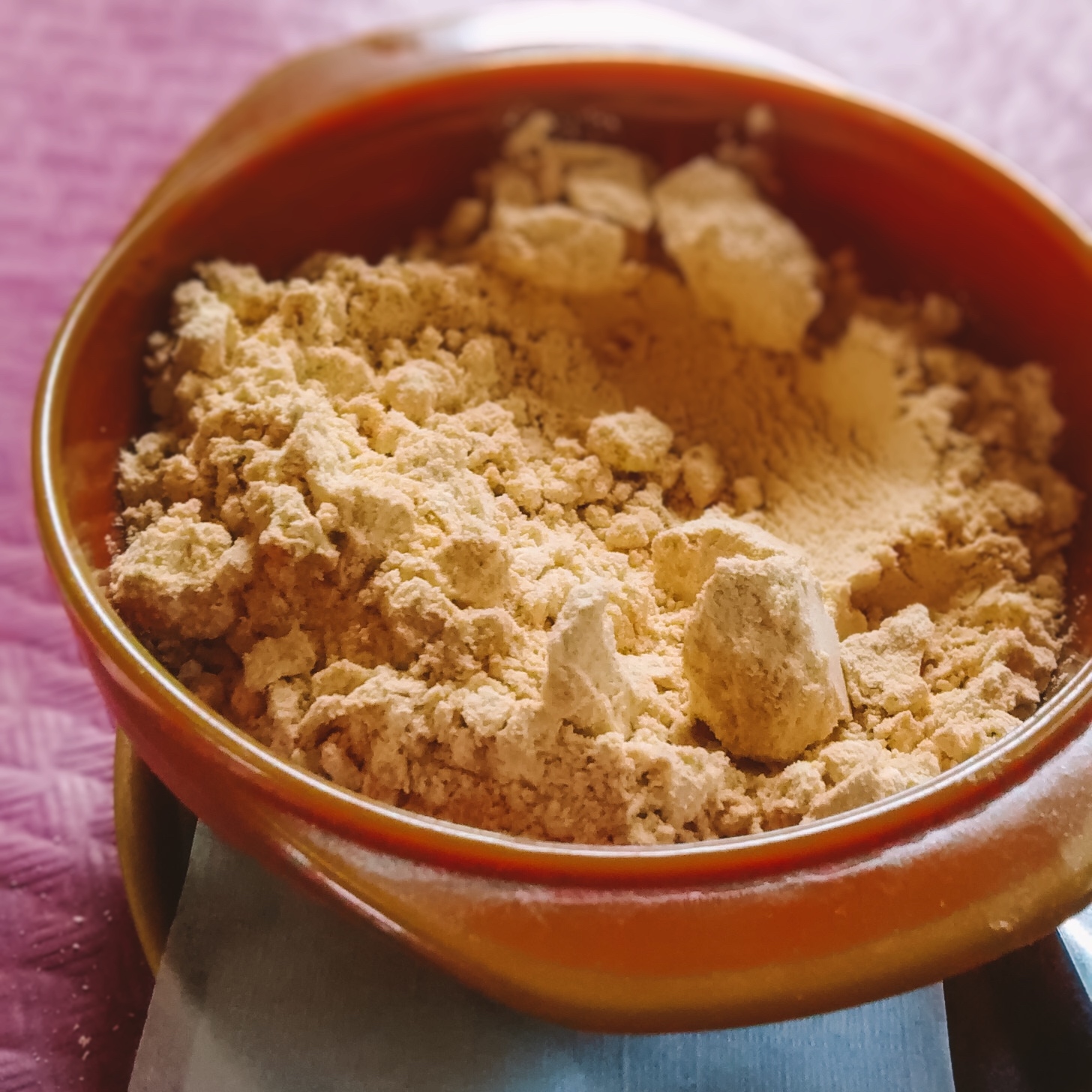 In the Canary Islands, cheese is served and eaten in many different ways, frequently as a appetizer. There are many varieties and types of Canarian cheeses. The main varieties are queso tierno (soft goat cheese), queso curado (mature sheep’s or goat’s cheese). However, cheese that is produced on the Island of Fuerteventura is one of the best in the world.

Queso majorero, is considered not only the treasure of Fuertevntura but the entire archipelago. Fuerteventura is inhabited by numerous herds of goats from the autoctonic species called majorero, and it is from their milk that the queso majorero is made. Depending on your preferences, you can choose fresh cheese (queso fresco), medium-ripening (semi-curado) and ripe (curado). In the ripe version, no more than 15% of sheep’s milk is added to goat’s milk. The name majorero dates back to the time of the Guanches (the native inhabitants of the Canary Islands, who lived in these areas before the Spanish colonization), and more precisely from the word Maxorata. In the Aboriginal language, that was what Northern Fuerteventura was called. Another of the cheese treasures of the Canary Islands is cheese made of milk acidified with thistle flowers (queso de la flor). Cheese is produced only in three areas of north-west Gran Canaria – Galdar, Moya and Santa Maria de Guia. 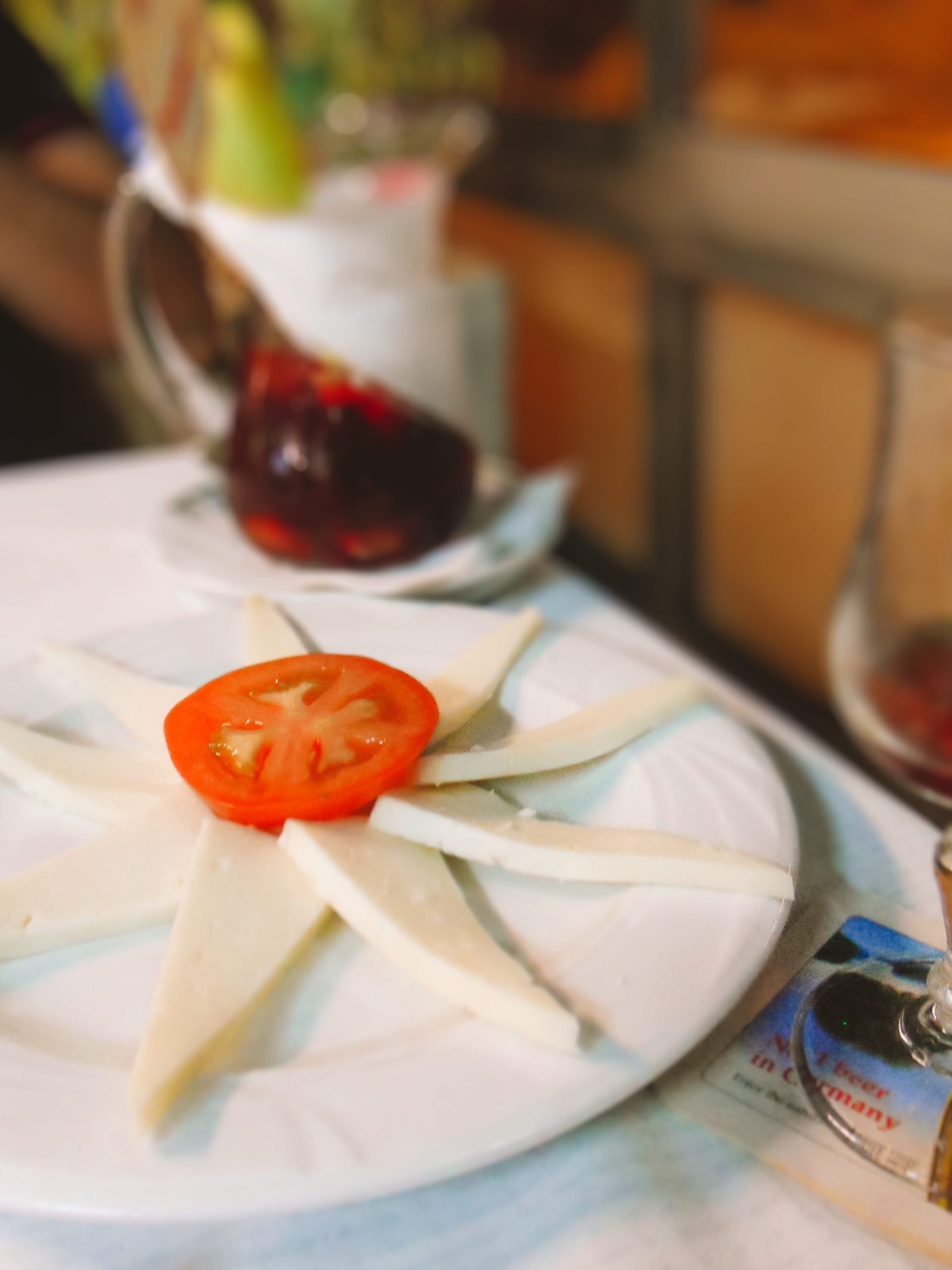 The cheeses I mentioned earlier are undoubtedly the most popular varieties of Canary cheese, known and consumed throughout the archipelago. But the truth is that the catalog of local cheeses is really huge. Several other suggestions to try during your stay in the Canary Islands are e.g. Palmero cheese – smoked cheese that can be tasted on the island of La Palma, can be consumed both fresh, semi-ripening and ripe. Another worth to try is called Herreño –  from the island of El Hierro, the furthest Canary Islands. It is produced mainly from goat’s milk. But it also contains a small part of cow’s and sheep’s milk. Especially worth trying is its ripe version.

In restaurants of fishing ports such as Arguineguin, Puerto de las Nieves or Puerto de Mogan you can always order “fresh fish” (pescado fresco) . Such fish is very often served as grilled with garlic and herbs. Heaven in mouth ! … and when we choose a small pub by the ocean shore, in addition to great taste, we will also be able to enjoy the beautiful views. 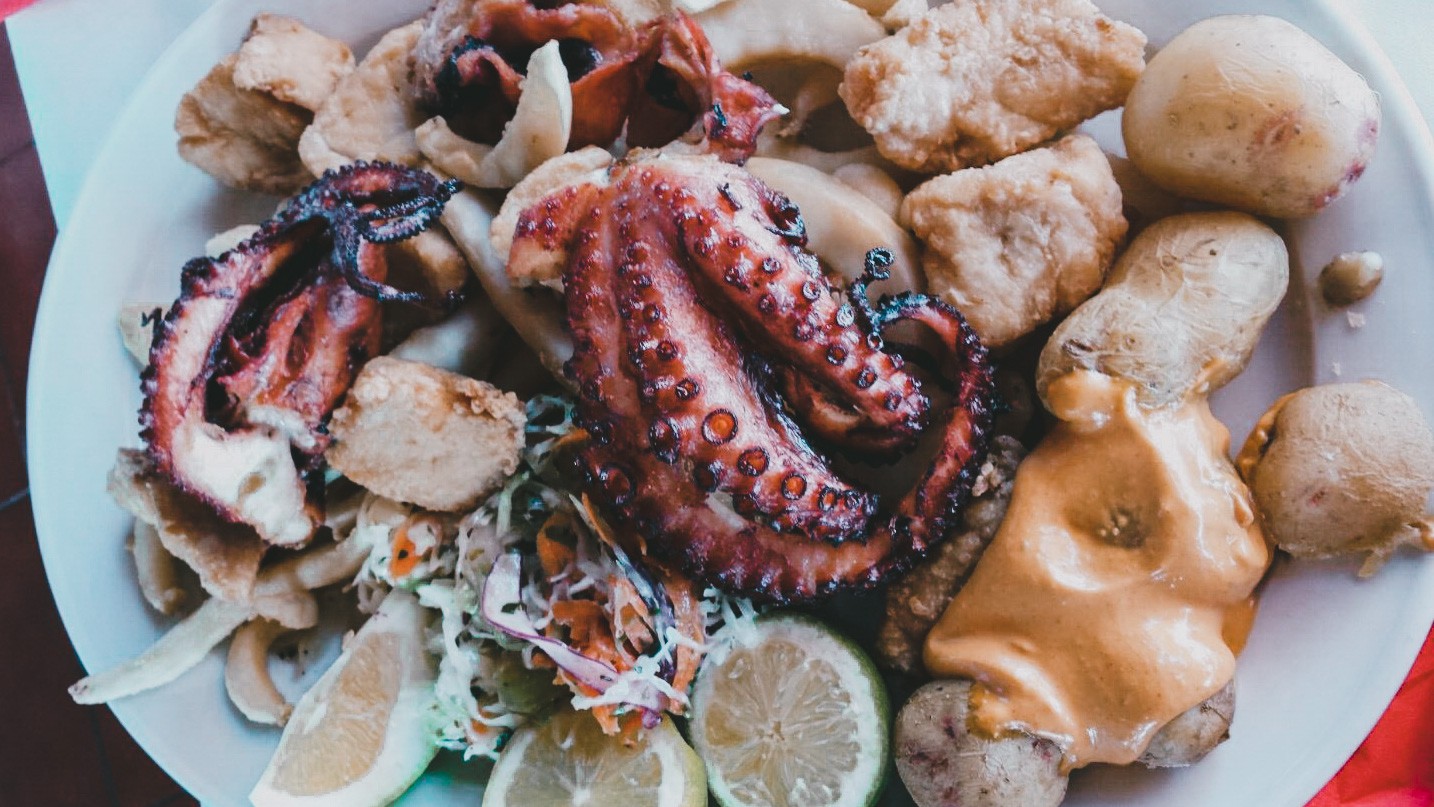 Seafood is something you should definitely try visiting no matter which island you decided to visit. Octopus is served on the Islands in several ways: grilled (pulpo a la plancha) or marinated in vinegar. It is also worth trying other seafood: calamari, shrimps in garlic sauce and others. 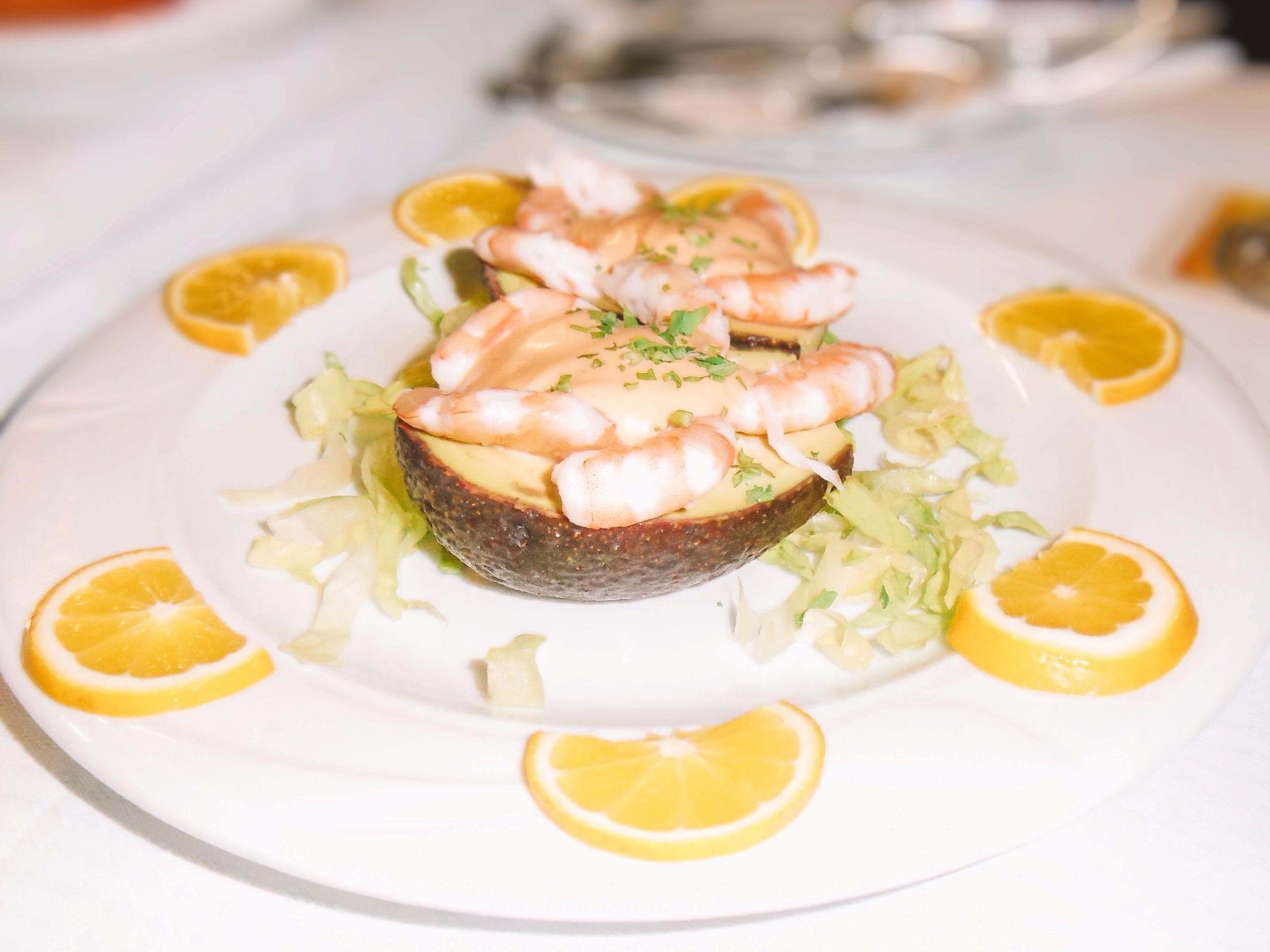 Canarian soups are mostly creamy and thick. A plate of this soup, called in Spanish potaje, is enough as a full meal. One of my favorites is potaje de lentejas, a thick soup based on lentils with the addition of Spanish sausage, chorizo. The lentil soup with slightly different ingredients we will also find in other regions of Spain, but another soup (potaje de berros) is a dish we only can find on the Islands. And this is because it is prepared on the basis of berros or watercress. Very often served as a cream soup in typical plates. 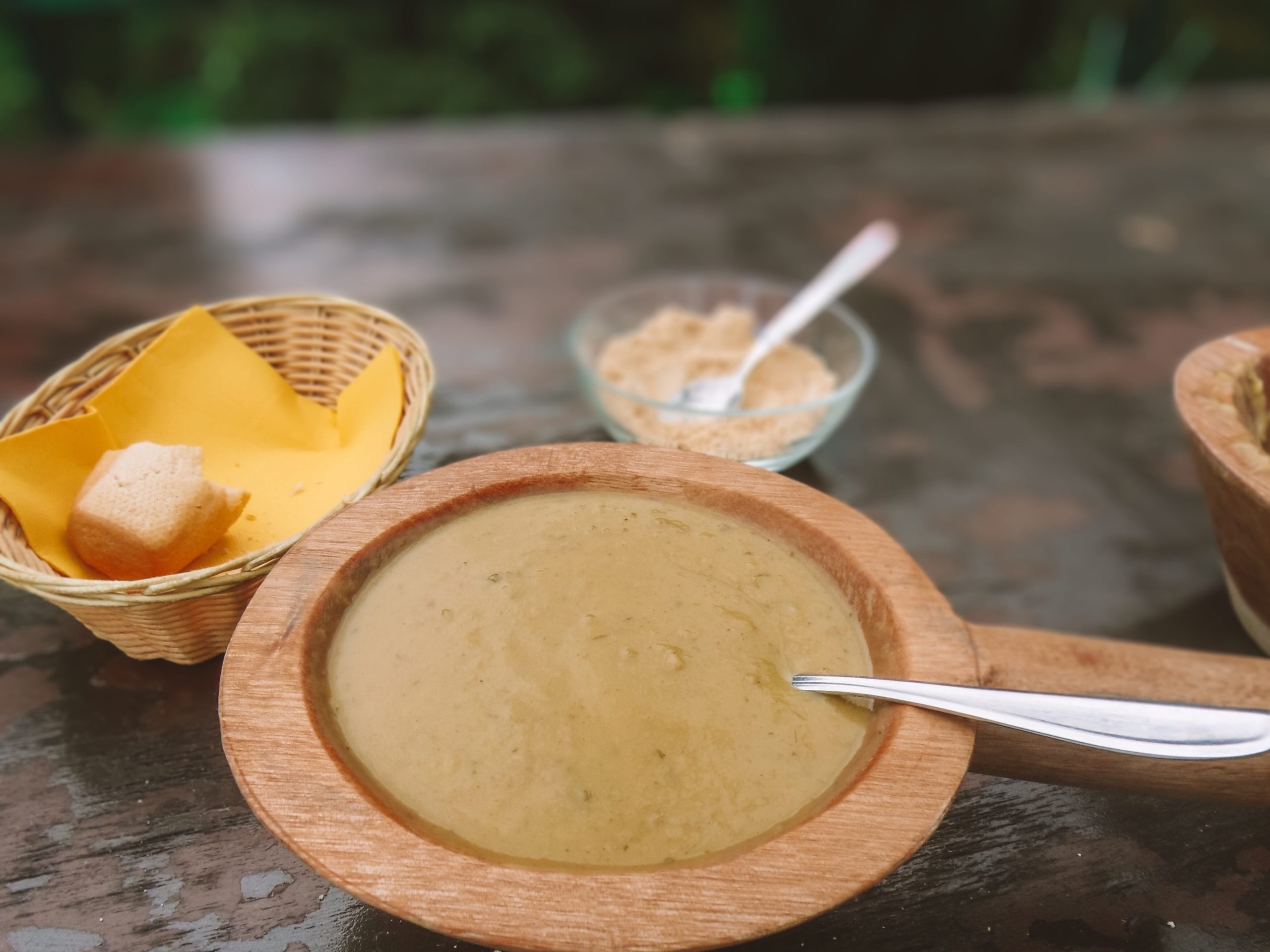 In addition to soups, it is also worth trying various stew dishes based on vegetables and chickpeas with the addition of meat called garbanzada. Not only the Canary Islands but all Spanish cuisine really makes great use of lentils and chickpeas, combining them with meat or  just the vegetables. A variation of such a soup is potaje canario, also known as puchero canario, which is simply a thick soup, this time not creamy but served with large pieces of vegetables. If you are not that hungry but you feel like soup then in one of the Canarian restaurants, you should ask for sopa de marisco, which is a soup made out of seafood. 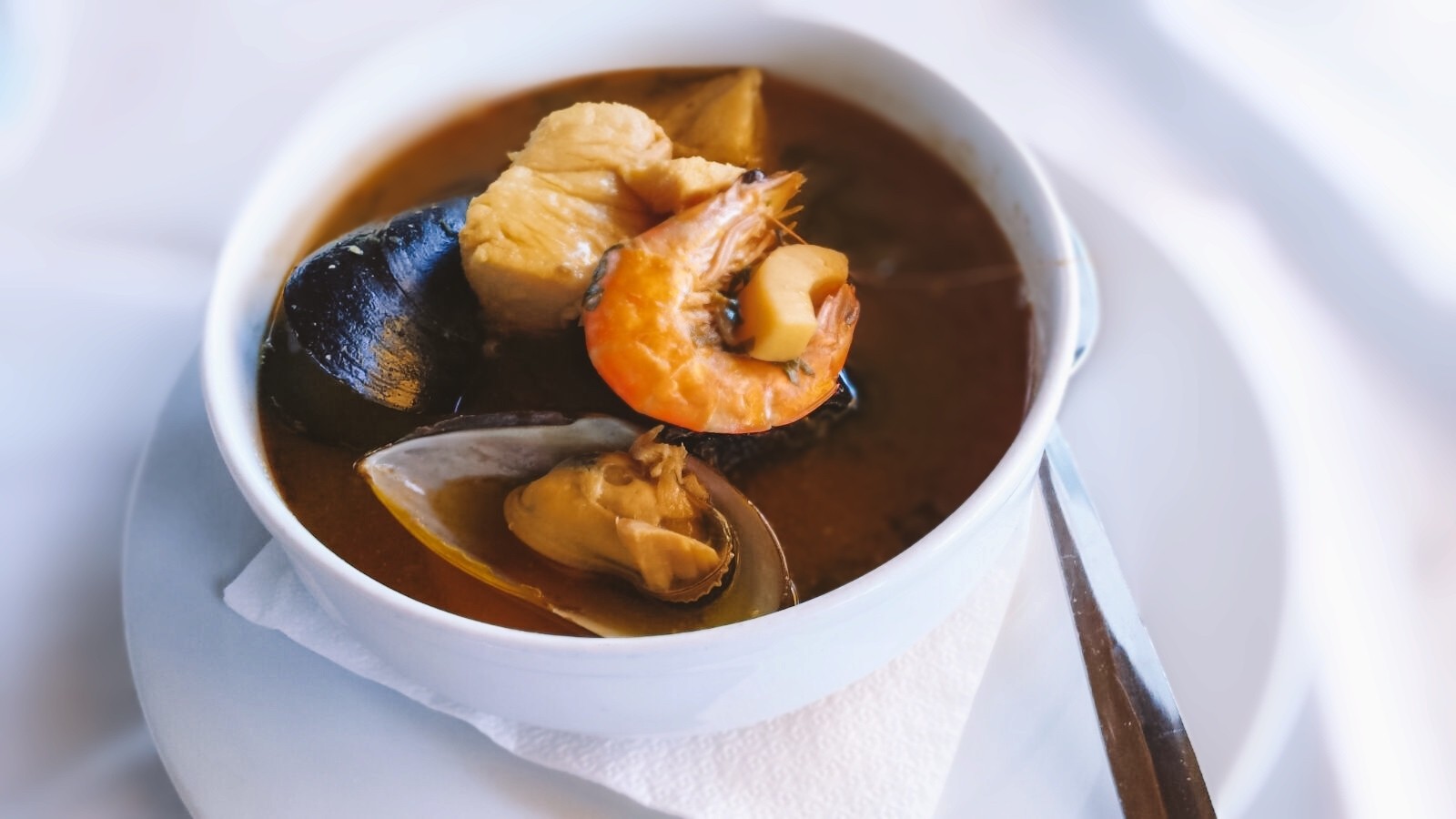 Staying on the topic of seafood, visiting the Canary Islands, it is worth tasting world widely known paella in the version with seafood. And although it is not a typical Canarian dish, paella in whole Spain is a must-have dish on Sundays.  The one with fresh seafood  looks great and tastes even better. 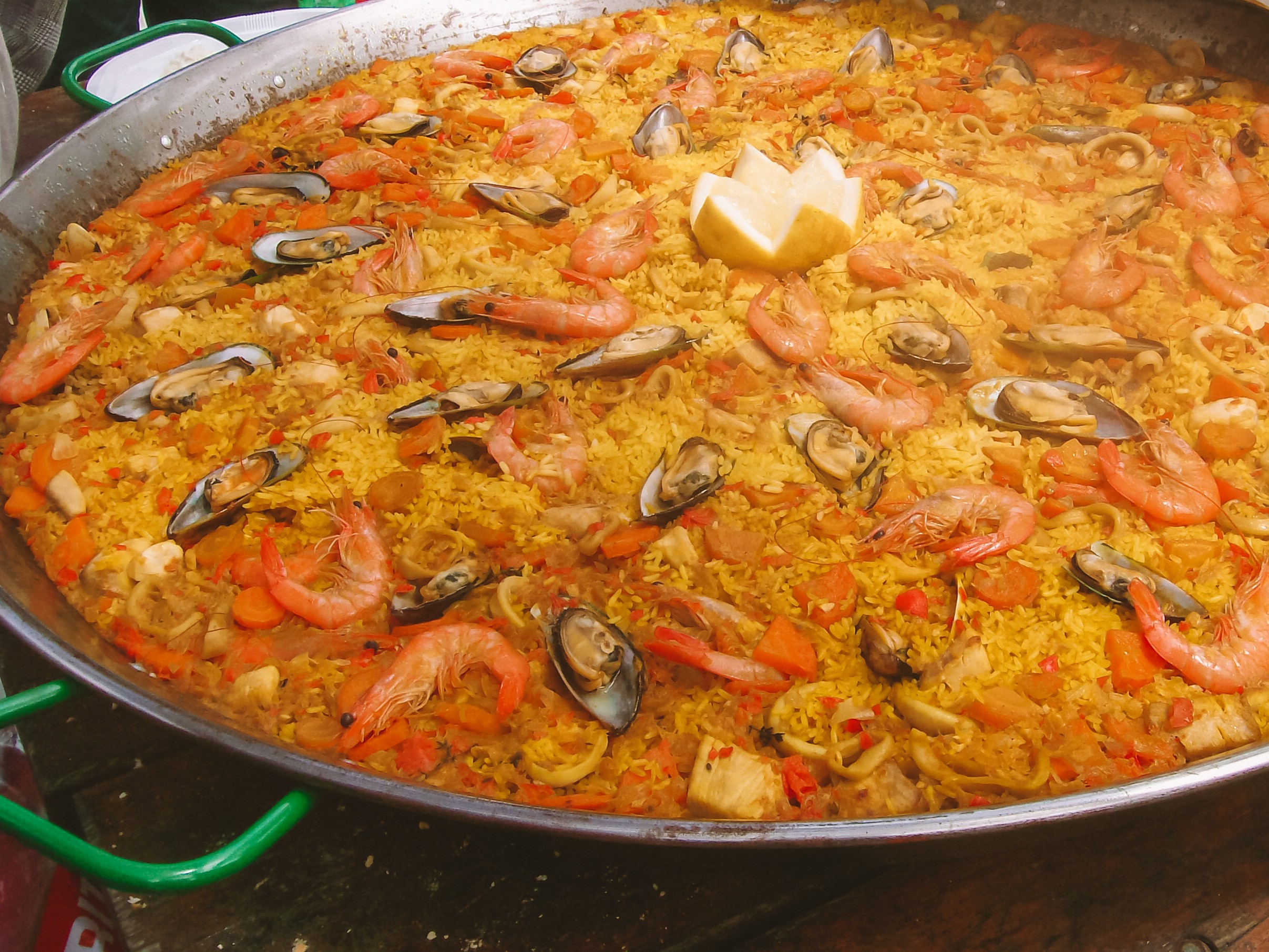 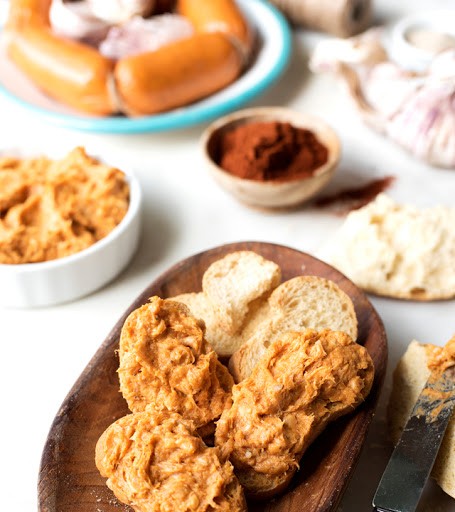 This popular dessert is made from ground almonds and yolks with the addition of sugar syrup. The  name itself already indicates that we will like the dessert. The name means ‘I like it very much’. A jar of bienmesabe, we can easily buy it in most Canary stores or larger supermarkets. I especially recommend the one produced in the small town of Tejeda, in the central part of Gran Canaria. Bienmesabe has a consistency of peanut butter and is often served like ice cream topping, or can be just spread in bread for breakfast.

BANANAS AND OTHER FRUITS

If you fancy a more natural and healthy dessert, you definitely should try Canarian fruits: bananas, mangoes or papayas. Traveling through Gran Canaria or Tenerife, it’s easy to find endless banana plantations. The Canarian ones are smaller than those we know, they are also more creamy and sweet.

A locally produced popular drink in the Canary Islands is called Clipper  and taste like sweet orangeade. The local beer is called Tropical and made in Gran Canaria, the one from Tenerife is called Dorada. Lanzarote is known for its high-quality wines, especially white ones, with a sweet and fruity note (Malvasia Volcanica Dulce).

There is also local rum produced in Gran Canaria – Arehucas. What’s more, the factory also has a rum museum, where you can see how sugar cane is grown, from which rum is made. And also what the subsequent stages of rum production look like, until we receive the final product that goes to store shelves. At the end there is also not only rum tasting but various liqueurs and other drinks that are produced there. The factory is located near the town of Arucas, in the north of Gran Canaria. Before the trip, it’s worth checking the opening hours and it’s best to go there in the morning because it usually closes around 13-14. 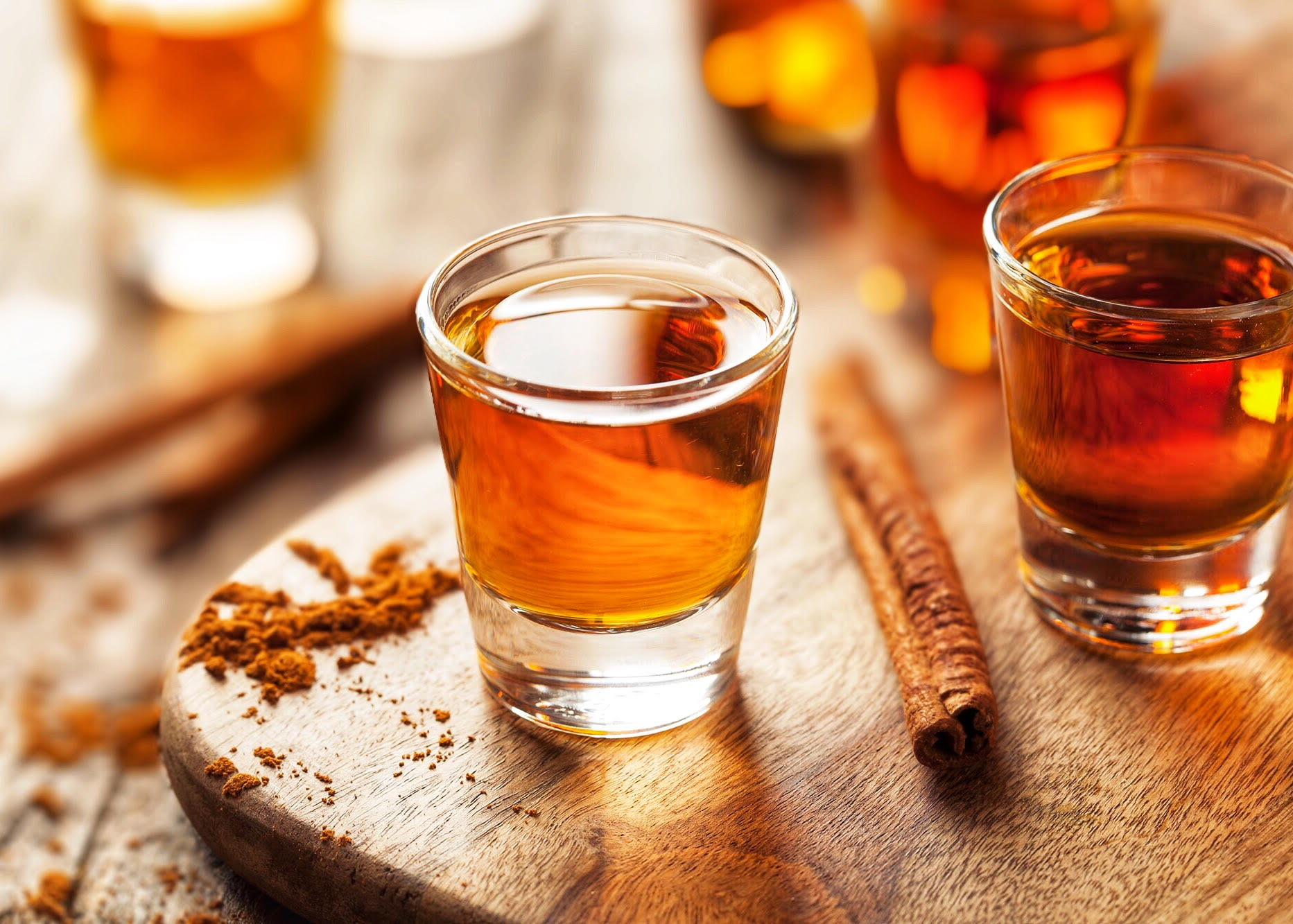 An interesting type of rum is honey rum (ron con miel). In other words, local sugar cane rum combined with local honey, thick in consistency with sweet, caramel flavor. Together with freshly squeezed orange juice, it is a common medicine for locals as a remedy for cold.

If we do not like to try local cuisine, choosing the Canary Islands we do not have to worry as in most restaurants and hotels all variety of international dishes are served. However I think is still really worth trying at least a few typical Canarian dishes or products.

Have you had a chance to taste Canarian or Spanish cuisine? Let me know.

SALAR DE UYUNI – THE BIGGEST SALT DESERT IN THE WORLD

25 INTERESTING FACTS ABOUT THE CANARY ISLANDS

KOALAS AND KANGAROOS IN BRISBANE – WHERE TO...